Everest Three Passes Trek is best high passes trek for those trekkers who are a bit experienced and daring to challenge the giant Himalayas of Everest region.

Everest Three High Passes Trek is for those who seek for more wild and challenging holidays experience as it is more demanding and the longer route crossing through three high passes in everest region. These are the Kongma La (5,535m), Cho La (5,420m) and the Renjo La (5,417m). You will also climb three hikng peaks; Gokyo Ri (5,360m) and Kala Pattar (5,54m) offer superb views of Everest, whilst Chukkung Ri (5,550m) is a lesser-known summit, tucked under the imposing Lhotse-Nuptse wall and more beautiful and heavenly sight.

Everest Three High Passes Trek starts with an exciting mountain flight to the Tenzing Hillary Airport at Lukla – a beautiful mountain town. We begin our hiking from here to Phakding on the first day and second day we trek to Namche Bazaar, the Sherpa capital. We have a rest and acclimation day at Namche as it is vital to get acclimatized ourselves to adapt with high altitude. On the rest day we have option to hike to Khunde and Khumjung – a charming twin Sherpa Villages. We follow by the regular Everest Base Camp Trek route walking through the places of Tengboche; where we will visit region´s most active monastery, enjoy colorful landscapes, other Buddhist monasteries, prayers walls, manis and Dingboche in the land enclosed by the soaring peaks. At Dingboche, trail breaks off with main trail and we head up to Chhukung (beautiful hamlet of Sherpa Village ). We climb Chhuking Ri on the acclimation day at Chhukung and overnight in Chhukung, also it is always recommended that "hike higher and sleep lower" helps you acclimatized. Then our first three passes, the Kongma La, is probably the toughest day, but your reward is stunning views of Makalu (8,485, the world´s fifth highest mountain) to the east. It is a leisurely descent to Labuche, where we rejoin classic Everest Base Camp Route, before climbing the famous view point of Kala Patthar, second of our three peaks.

Our trek to the view point of Kala Pathar is followed by the tough climb through Cho La pass that takes us to the cobalt-blue lakes at Gokyo. Here we trek our third peak; Gokyo Ri (5,360m). This is a lovely peak above the Gokyo Valley, with fabulous views of the Mt. Everest, Cho Oyu, Makalu, Ama Dablam, Nuptse, Cholatse and many smaller snow-capped mountains. After enjoying awe inspiring views from Gokyo Ri and exploring Gokyo lakes, we make our way to the next great pass, the Renjo La. Making a night in Lungde or Marlung we follow a little of the route used for centuries by the Tibetan Traders via Nangpa La to get to Thame. Following the classical route, we drop down to Lukla and fly back to Kathmandu leaving behind our foot prints in the shadow of the Everest.

Kongma la is the highest pass of Everest Three Passes Trek being at an altitude of 5528m. It gives the unbelievable panoramic view of the mountains. It is generally less crowded and less visited by people and is the most challenging of all. Kongma la pass takes all the way to Chhukung village giving the most stunning and detailed views of several mountains. The stimulating paths and wonderful views make the pass more daring and exciting.

It is a physically challenging task to ascend Chola requiring crampons for the slippery path. Kongma La pass is at an altitude of 5,535 m (18,160 ft) located between Chukhung and Lobuche village. While returning from base camp trekkers can attempt Kongma La. Among three passes (Renjo La, Cho La, and Kongma La) Kongma La is the highest pass. Renjo La pass is located in Khumbu Valley at an altitude of 5,360 m (17,585 ft). Renjo La is in the eastern front of Lungden leaving Gokyo to the west. The path to it is very difficult and passing it during winter is very hard to deal with.

The best time duration for Everest Three Pass trek is Spring (March, April, and May) and Autumn (September, October, and November) when the climate is warm and sunny. for more details visit Best time to Travel 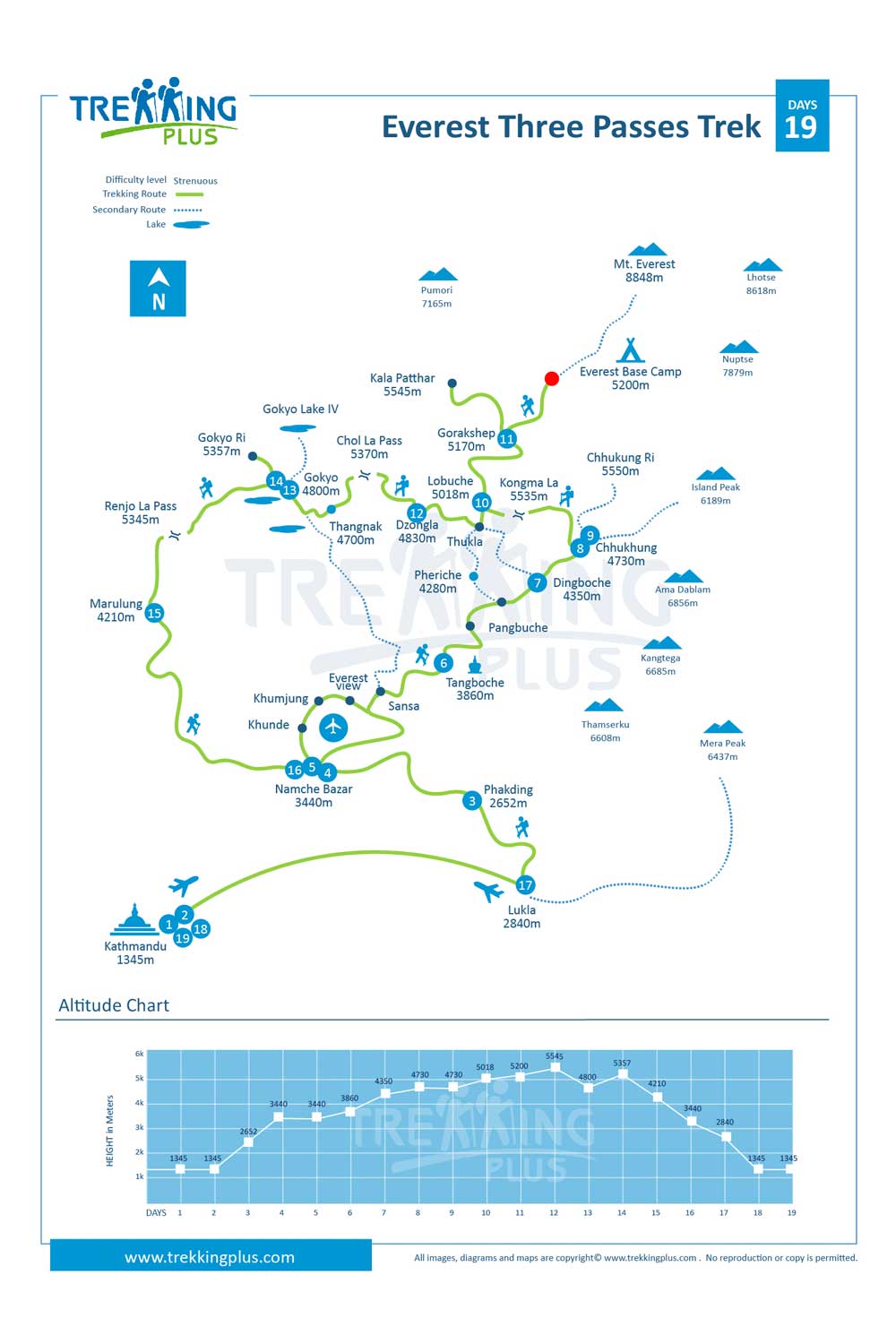