on the way to Mardi Base Camp

Mardi Himal Trek is located just east of the Annapurna Base Camp trek. Mardi Himal Base Camp outstandingly positioned at the base of Mardi Himal and the Annapurna region´s most iconic mount Machapuchhre literally meaning "Fish tail". The trail goes along small winding paths, through enchanted rhododendron forests until you climb out of the forest at an elevation around 3,300 meter. The landscape changes quite abruptly into a rugged high mountain landscape, with amazing views of Mardi Himal, Machapuchre, Annapurna South and Hiunchuli. From High Camp (3700m; some maps incorrectly mention 3900 m) you can climb up to Mardi Himal Base Camp in about 3-4 hours, which offers spectacular close up views of the entire Annapurna Range. There are simple guesthouses and homestays along the entire route. If you plan to do this trek in the winter months it will be full of snow and much more fun.

The time from Mid September to Early December is the best time to go trekking to Mardi Himal. The weather and temperature at the Mardi Himal is variable throughout the year. Temperatures and weather are different in the four individual seasons. Weather along the Himalayas do not remain constant and stable for a long time. Likewise, weather at the Mardi Himal is also changeable. However, during Autumn and Spring, weather reports do not show much fluctuations.

Spring - March, April and May
The weather is perfect for the trek. The sky is blue and clear. The views of the mountains come unobstructed. Forests are full of colorful Rhododendron blossoms. The highest temperature may go up to 20 degrees. However, the daytime temperature is generally near to 17 degrees. Nights and early mornings are colder but not freezing.

Monsoon - June, July and August
June brings warmth in the Mardi Himal. The summer lasts till August. Summer in Nepal combines with the heavy downpours and frequent monsoon rains. During monsoon, the views may not be clear. Dark clouds may cover the sky, and heavy rainfalls may obstruct the mountain panorama. But if you are lucky, you will catch the dirt less and most beautiful scenic views after the heavy downpours. The average temperature during monsoon ranges between 10 to 23 degrees. The temperature after rainfall during the nights and mornings drops from 5-10 degrees.

Autumn - September, October and November
Autumn at Mardi Himal means absolutely stunning sunrise and sunset on a clear sky. Monsoon clears the atmosphere. You will see the mountains shining with grace. The weather remains clear and more stable. There is least chance of rainfall. But there are chances that you’ll see little rainfall while trekking in early September. During the daytime, the temperature is around 20-degree Celsius. The night temperature is near to 5 degrees.

Winter - December, January and February
Winter in Himalayas means freezing cold. December-February is winter at the Mardi Himal. The weather is dry. Piles of snow covers the mountains and the trails. During winter, the temperature drops down by 5 degree Celsius (approx) with every 1000 meters ascent in altitude. Walking under the sun during daytime is warm. The temperature will be around 9 to 12 degrees. The mornings and evenings are freezing. Temperature reaches to about – 5 degree Celsius.

Food, During Mardi Himal Trek, we serive you typical Nepalese trekking foods on this route. The most popular Dal Bhat MOMO, Friend rice are healthy and filling too. Local farmers grow majority of food product by themselves. You will have many items to choose in the food menu. But, the menus are still short than in the other trekking routes. Some of the local products like corn bread are famous. Good items like Pasta, Pancakes and Chopsey are more popular for breakfast.

The drinks like tea, hot lemon with honey, ginger tea, soda, coffee, etc are available. However, the price of drinks is higher. Also, drinking alcohols during the trek may degrade your health conditions. So, choose wisely what to drink and what not to.

Accommodation, During Mardin Himal Trek we will sleep in simple guesthouses and homestays along the trekking trail. The accommodation during Mardi Himal trek is basically a tea house or mountain lodge accommodation. During the peak seasons, you may have to share your rooms with your fellow trekkers. Sharing a room means sharing the bathroom and mattress too. Mardi Himal trekking is becoming more popular day by day. As a result, the options for accommodations are improving.

The options for accommodation becomes lesser as you ascend to higher altitudes. You’ll have more accommodation options during the less sorted seasons. During these times, most of the teahouses provide better services in lower rates. They also offer discount offers to the travelers.

The trek is suitable for people of all age groups and with all needs. It’s not necessary to be very fit for this trek however a person with a minimum fitness level who can walk 5-6 hours each day is expected to join this route. This is considered as one of the easy-level trekking routes of Nepal. This is a complete tea house / lodge-based trekking route. We will be eating and sleeping in the lodges. The highest altitude we sleep is slightly below 3600 meters. Trekking Plus leaders will do the best to accommodate you and make you comfortable while on the journey.

Mardi Himal trek is a Moderate to difficult trek. The walking distances are short and easy. But you will gain altitude as you walk. Mardi Himal Base Camp marks the highest point on the trek at 4,500 meters. The day including hike from high camp to the base camp is a long and tiring one. The walk via narrow path and steep slope is very difficult. It’s a steep descent back down from base camp to the high camp. So, if you have knee problems, this part is going to be hard for you. During Mardi Himal trek, you won’t be at a high altitude for very long. So, there is less risk of altitude sickness. However, it is better to be aware of altitude sickness.

If you are travelling in winter, you need to prepare for extreme cold and bad weather. Choosing monsoon for the trek is hard too. The trails inside the forests gets slippery and tough when it rains.

Durga (the owner) is amazing and energetic person and he helped me to organize Mardi Himal Trek. That was very short, but such amazing trek! Thanks to him my lonely… 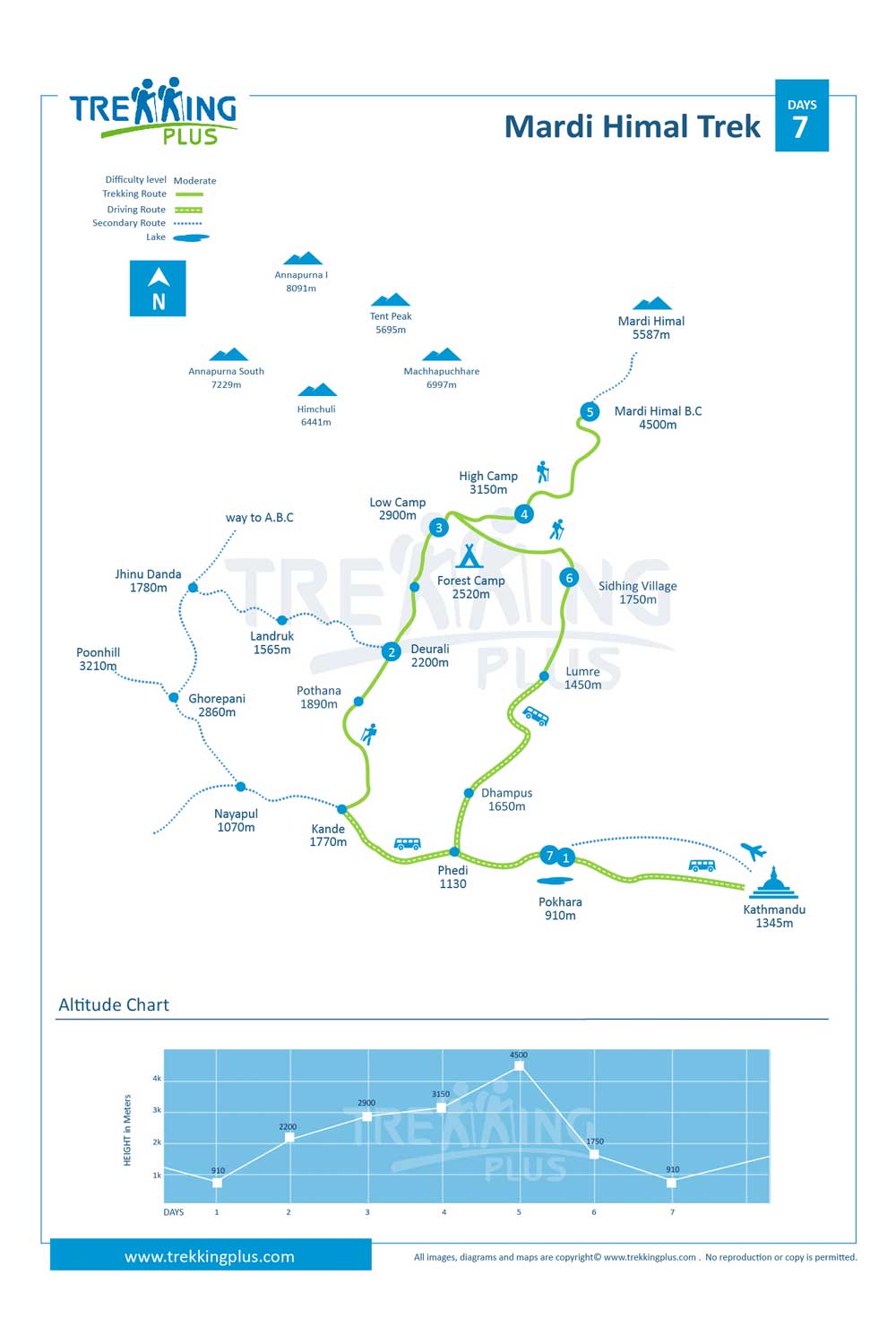